In 1983 Father Thomas Ryan, Pastor of Holy Family Catholic Church, published a small book explaining the vision of Holy Family and the building of a church on the property.

“Dear Parishioners and Friends of Holy Family Parish:
For a vibrant Parish, there is probably no more exciting and challenging dream than that of
building a new Church to house the worshipping community.  The history of Holy Family Church
began with simple, humble origins, and has moved steadfastly through the years, with a dedicated, committed congregation, determined to meet changes and growth every step of the way.  At this time, our Parish has evolved to a point where our present structures are no longer adequate to accommodate our spiritual, educational and social needs.”

“For everyone who asks receives, and he who seeks finds, and to him who knocks it will be opened." - Matthew 7:8 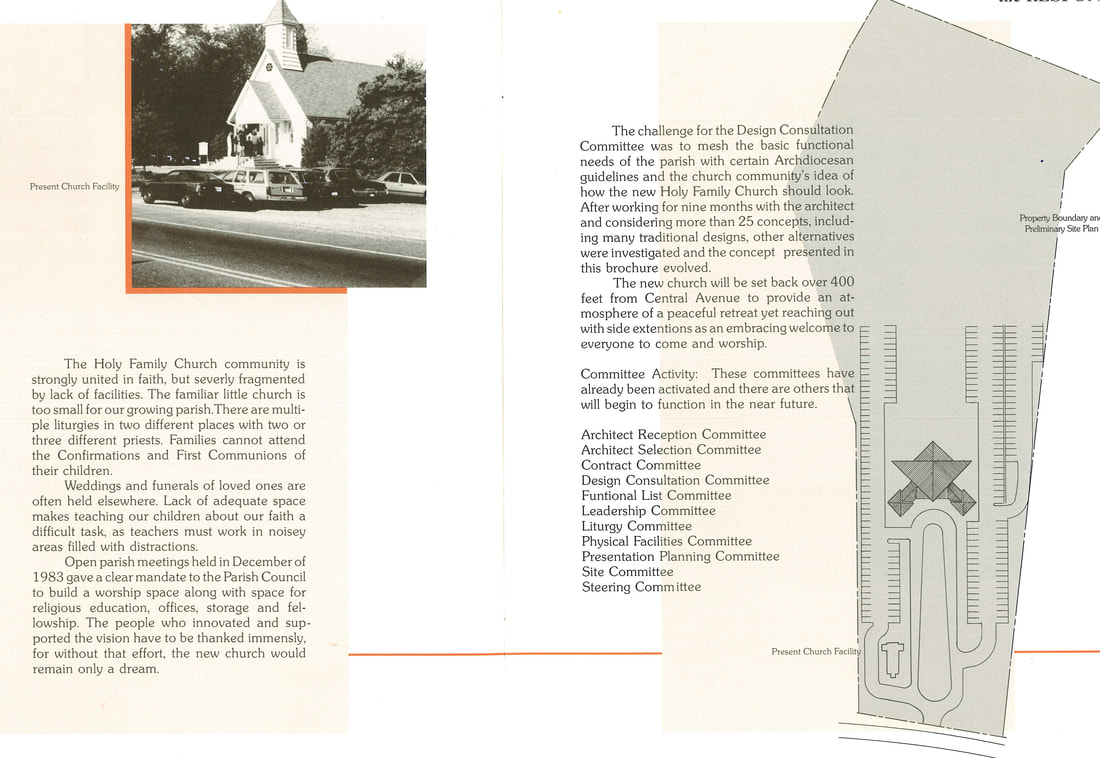 A popular hymn sings “The Church’s One Foundation is Jesus Christ the Lord.” And indeed He is. Christ of course works through us as individuals and as a church community. The foundation of Holy Family Church, or at least the wonderful addition built in 1989, literally is built on the foundation of its parishioners.
After the ground was prepared but before the foundation of Unity Hall and the new classrooms were laid, several women led a parish wide effort to memorialize the contributions of the parishioners who had made the hall possible. This effort gave everyone the opportunity, again literally, to lay the foundation. These women gathered smooth stones from any source they could find and distributed them to parishioners asking them to sign their names and write any petition or blessing they wanted on them. Then the stones were spread around the base of the foundation before the concrete was laid.
So whenever the parish gathers as a whole or groups gather for special purposes from youth ministry to RCIA to catechetical training to anyone of the more than fifty parish ministries, their labors reflect the foundation of so many of the early parishioners who made the hall and its magnificent facilities possible.

"But you, my dear friends, must build yourselves up on the foundation of your most holy faith, praying in the Holy Spirit"
-Jude 1:20 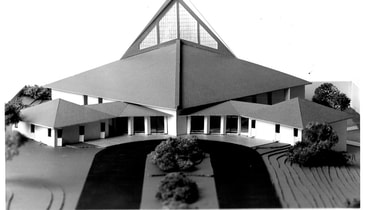 The history of Holy Family Church is marked with episodes of heroism and great effort on the part of so many of its parishioners both in its early years and later as it developed into one of the largest parishes in South County.

Perhaps the most telling of these episodes is the effort by members in the 1970’s to make Holy Family its own parish. Sixty members of the church met often to consider how to approach the Archdiocese with the request to become a parish rather than a mission of Our Lady of Sorrows in West River.

So determined were these faithful that they developed their own set of parish boundaries and then divided that area into sixty different sections, assigning a section to each one of them. Then, they literally went door-to-door canvasing the area to see how many Catholics lived within those boundaries. They did not try to “sell” the church to anyone but simply did the survey to determine the number of Catholics. (Many of whom actually were motivated to return to Mass and the sacraments).

With the numbers gained from the survey, the “sixty” then approached the Archdiocese and convinced decision makers there that Holy Family indeed had sufficient numbers to become its own parish. Through their efforts, Holy Family was named an independent mission in 1980 and a parish in 1982.

The power of the Holy Spirit is certainly demonstrated through the efforts of these early founders of the parish. Their efforts are eloquently captured in the words of Saint Paul’s letter to the Ephesians:

So then you are no longer strangers and sojourners, but you are fellow citizens with the holy ones and members of the household of God, built upon the foundation of the apostles and prophets, with Christ Jesus himself as the capstone. Through him the whole structure is held together and grows into a temple sacred in the Lord; in him you also are being built together into a dwelling place of God in the Spirit.
Ephesians 1:19-22

As the parish begins to look ahead with our strategic planning process and consideration of designs for an expanded facility, this is a good time to look back on parish history. Reflecting on where we have been will help us think about our future. Taking the suggestion of one of our parishioners, we are beginning a new feature in the bulletin and on this webpage.  Every week there will be a question about parish history followed by the answer in the next week’s edition and a new question. We hope that new parishioners, and longtime members as well, will learn about the parish and deepen their knowledge of the remarkable “country parish” upon which our parish was built and deepen our own faith through an appreciation of how the Holy Spirit worked through those who built and sustained it through the early years.
Many of the answers to questions can be found in the history of the parish published at the time the current church was built, From Seminary to Parish. Copies are available from the parish secretary.

Question #3:
Did Holy Family ever have a school?

Question # 2:
Where did the first priests for Holy Family come from?

Question # 1:
In what year was the current church built? The chapel? And was the Chapel the original parish church?

Answer to Question #2:
The first Priests were Marists, members of the French order of mission priests who saw rural Maryland as potentially fruitful mission territory at the time.  Even though the Marists started a school to train priests, they decided to leave in 1900.  From then until 1926 the Franciscans provided priests to work under the Archdiocese in serving the Dodon community.  In 1926, the community was placed under St. Mary's in Annapolis as the Mission of Holy Family.

Answer to Question # 1:
Ground for the current church was broken in June, 1989 and dedication was in June 1991. The Chapel was dedicated on September 29, 1929. (Side note, the chapel was built from a Sears kit. Sears had a kit for churches similar to the several thousand individual home kits Sears produced from 1908 to 1940). And, no, the Chapel was not the first parish church. Masses were held at Dodon, the country home of the Steuart Family from 1890 until 1929. A section of the house is still visible on the grounds of what is now the Dodon winery.