Our Church and Facilities 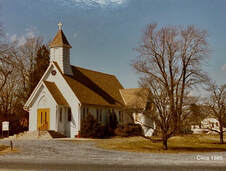 ​Holy Family dates from tiny beginnings in the 1880’s when some French priests were recruited to serve the rural community of Davidsonville.  They didn’t stay long because they had expected that our community would be very close to the city of Washington, and in the time of the horse and buggy, this was far-afield.  So they soon left.

But a community had been established, which first met in a large former family residence in Davidsonville, and later in the little chapel, which was built in 1929.  The chapel was built from a kit ordered from a Sears catalogue.

In the early years Holy Family was a mission of other parishes – at times staffed by the priests from Our Lady of Sorrows in Owensville, and the Redemptorists.  We have access to a copy of one letter that a Redemptorist priest wrote to his community back in the 1930’s where he said, “You all need to transfer me – I am a New York City boy and all the people around here do is talk about the tobacco prices!”

Indeed, Holy Family was a rural community until not too long ago, and farming is in the memory of many current parishioners. On August 15, 1982 our community became a parish and in June, 1991 our new church was completed. In the years since we have continued to grow, until now we have around 2,000 families.  And we have 75 different organizations and ministries.